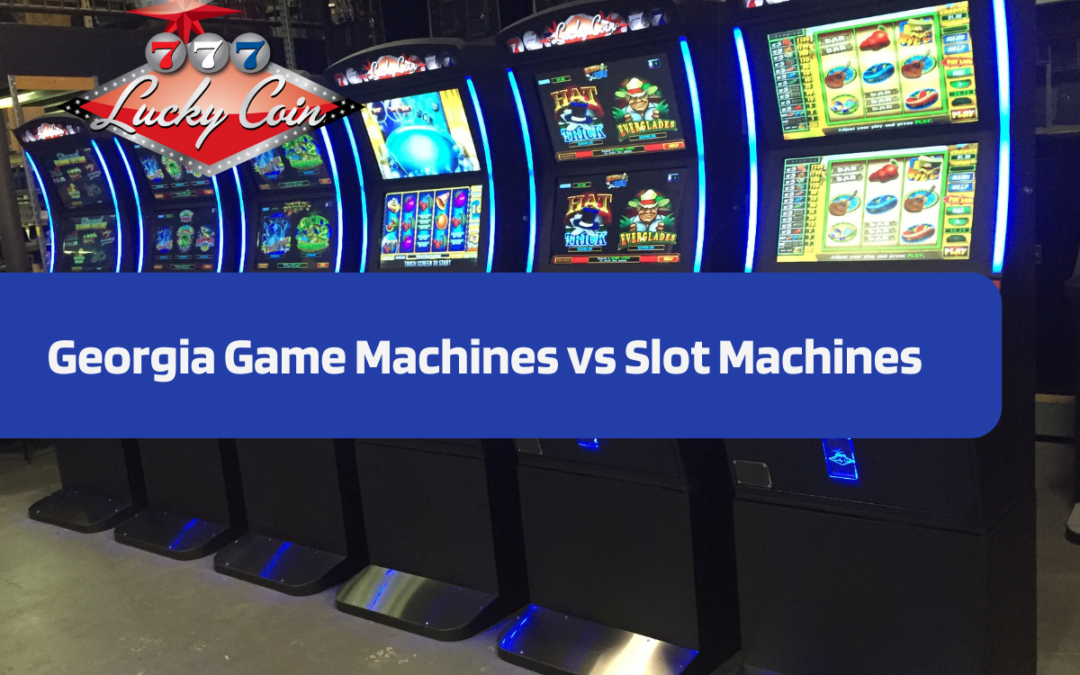 The number one questions that we get at Lucky Coin is about Georgia game machines vs slot machines, and what is the difference between the two types of games. We will answer that question here to clear up any misconceptions on the Georgia Game Machines.

Everyone we talk to has a pretty good understanding of what a slot machines is, most have either played one in Las Vegas, Atlantic City, Biloxi, or a host of other places around the world. Slot machines in those place are simply based on luck and very few allow an element of skill when playing the games. For a slot machine in these places, a winning player is paid out in cash, or a voucher that can be redeemed for cash.

In Georgia, the Georgia game machine industry is regulated by the GA Lottery, and although a lot of the games and the cabinets look comparable to the games in Las Vegas, that is where the similarities end. According to HB 487, The state of Georgia defines a Class B Coin Operated Amusement Machine, or COAM or Skill Game, as “a bona fide coin-operated amusement machine that allows a successful player to accrue points on the machine and carry over points won on one play to a subsequent play or plays and rewards a successful player in compliance with Georgia law and does not reward a successful player with any item prohibited as a reward by Georgia law”. Not only do these games allow for points or credits won on one play to accrue and be used on subsequent plays, these games are also skill based, which means that once a player inserts money into the game and begin to play, a player will have a choice on what the outcome of the game is through a decision during the game play, be it a nudge, hot swap, or some other move. So unlike a slot machine, where it is simply luck that makes you winner or a loser, with a Georgia game machine, you will have the ability to skillfully create a winner while playing.

Another huge difference between Georgia game machines and slot machines, is on how prizes are awarded to winning players. Slot machines in a casino can award a winning player with cash, or a voucher that can be redeemed for cash. In Georgia, Georgia game machines players can win prizes by earning points. Points earned in one game can be rolled over into subsequent games, and then points are redeemed for things that the location sells: merchandise, gas, Georgia Lottery tickets, or future plays on machines. No cash payouts are allowed.

Simply put, in Georgia, there is a pretty big difference in comparing Georgia game machines vs Slot Machines. A Georgia game machine, Class B GA COAM Skill Game or Coin Operated Amusement Machine, is a skill-based game that rewards a successful player with a ticket that can be redeemed for gas, merchandise, Georgia Lottery tickets, or additional game plays.

Hopefully, this has helped to answer any questions or answer any misconceptions. If you are interested in working with Lucky Coin, you can contact us at info@luckycoininc.com, call us at 1-855-34-LUCKY, or visit us at our website. We specialize in Class A and B Georgia Lottery Skills Games, ATMs, Pool Tables, Golden Tees, TouchTunes Jukeboxes, Counter Top Touch Games, and all other coin operated amusement that make you money! We have put together comprehensive packages for gas stations, bars, restaurants, and nightclubs that have profited them thousands of dollars, with almost NO cost to you. We provide the equipment, installation, maintenance, and exceptional 24/7 service FREE of charge, and you simply benefit from the added income! It’s a Win, Win!